Cork explorer Pat Falvey: Nothing is more important than family 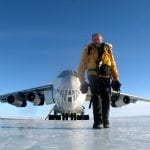 GURRANBRAHER native Pat Falvey who is well known for his adventurous spirit, climbing mountains and exploring the arctic, has revealed lockdown has taught him there is nothing more important than family.

Mr Falvey, who was the first person in the world to complete the Seven Summits twice by climbing Mount Everest from its north and south sides, said lockdown has given him time to reflect and realise that time spent with family is precious.

Pat, who was just home from climbing Kilimanjaro when the Covid pandemic began to take hold, had to put his next trip, climbing the Himalayas, on pause.

“I had lots of things planned for this year and then all of a sudden everything was cancelled, I went from having an income, to no income.”

Mr Falvey said he started reflecting on the additional time he had to spend with his family and began writing a book on leadership, as well as a program on resilience and happiness in the workplace.

The explorer said the shift in how we work will require people to change and adapt, which some find difficult.

“A whole new world of opportunity is opening up to me,” Mr Falvey said.

The entrepreneur adventurer who has written seven books already said his latest book was to teach people to be self-led and to find opportunity when faced with challenges and he hopes to have it finished by November.

Over the past few weeks, Mr Falvey has been asked to speak online in webinars and lectures for large corporate companies such is his depth of positivity about what he himself calls “common sense” gained from life experience.

Pat, aged 63, who attempted to commit suicide at the age of 29, said that his main message was it is okay not to be okay, as long as you do something about it.

Mr Falvey said the pandemic also gave him time to reflect on his own life and his own values in life.

“I’m an introverted extrovert and I have learned that at the moment I have learned the important things are to stay connected and stay optimistic and also the ability to show love, to care for each other is crucial.”

The inspirational speaker said he is now focused on creating a legacy and helping people make the most of their lives.

Mr Falvey is creating an online club called ‘Forever Young’, for 50-90-year-olds with the aim of helping them make the most of their lives.

“You only live once,” Pat said.

“I have lived with 32 tribes and now it is time to create my own tribe and get the tribe together to think positively and push themselves to their limits.

“We are what we leave,” Mr Falvey said, “and what we leave is family.” For information on Pat Falvey’s new endeavours log onto Patfalvey.com.

This article appeared on Echolive.ie by Roisin Burke