A brisk walk benefits the brain 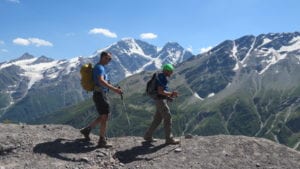 A brisk walk is more than just a workout, it benefits the brain too. According to new research. Walking increases blood flow to the brain, Which can help reduce the risk of cognitive decline? Researchers followed 160 older adults who showed evidence of cognitive decline and found participating in exercises like walking for 30 minutes three times per week helped improve their cognitive abilities.

James A. Blumenthal, PhD, professor of psychiatry at Duke University notes that exercise could help increase brain volume and blood flow, which appear to have an impact on the executive functions of the brain, including attention span, focus and memory. It’s never too late to start walking in the hope of warding off cognitive decline, says Blumenthal. “Walking is a simple, cost-effective way to reduce long-term health risks,”

Some additional research found walking five miles per week had a protective effect on the structure of the brain during the decade-long study. In particular, older adults with mild cognitive impairment and Alzheimer’s disease had a slower decline in memory loss over five years compared to those who walked less. Walking keeps your brain sharp.