New book charts the rise and fall and rises again of one of Ireland’s most prolific adventurers. 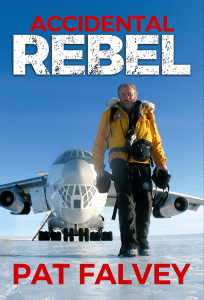 Fast-paced, reflective, humorous and emotionally honest, Accidental Rebel details the life of a man
who has both paid the price and reaped the rewards for refusing to accept the restrictions society
put on him in the pursuit of his dreams and a life of adventure.

In his new autobiography, Irish adventurer, Pat Falvey, has written a compelling account of his life,
from his youth in Cork city’s impoverished north side to his joy at standing on the summit of Mount
Everest, and his pride at leading the first-ever Irish team to the South Pole. He knows that luck was
on his side in his years as an extreme adventurer during which almost thirty of his friends and
colleagues lost their lives in some of the world’s most hostile and beautiful environments.

“I have had many ups and downs in my life but, from as far back as I can remember I have
considered every day as a new adventure and looked forward to what it might bring. Despite leaving
school at fifteen, I’ve had a lifelong love of learning and an insatiable curiosity about what it is that
makes people tick. One of the things I love most about travelling all over the world is hearing the
stories of people from different cultures and traditions.

“I’ve learned that we are united by far more than that which divide us. I’ve seen that people
everywhere – from the Sherpas on Everest to the Inuit living in the Arctic and the scientists working
at the South Pole – want to live full, useful, joyful lives. We are all sources of inspiration for each
other; if I had never heard of Shackleton, Amundsen and Hillary, I might never have been inspired to
go to the highest and most remote parts of the planet.”

Dreaming big is something Pat has done since his earliest days where, as a six year old, he cut his
business teeth, knocking on doors and collecting cast-off clothes that his grandmother sold at
country markets. Her belief that Pat could be anything he wanted to be, coupled with an ambition
that came from excelling in sports, meant that he was always challenging limits. At fifteen, he
declared that he was going to become a millionaire. By the age of twenty-three, that dream had
come true. However, the 1980s’ recession all but destroyed his business and brought him to the
brink of the abyss. When he emerged from the darkness, he was ready to dream big again.

When he stood on the top of Carrauntoohil – Ireland’s highest mountain – for the first time, at the
age of twenty-nine, Pat announced that he was going to climb Mount Everest. It was his second ever
mountain climb and the only person who took him seriously was himself. Nine years later, he was
standing on the top of the world’s highest mountain. Following his move into the world of
adventure, he clocked up several national and world firsts before returning to the world of business.

Now working in the areas business, adventure travel, corporate and personal motivation, Pat says
that is the unsung heroes that are closest to his heart. “Maybe that is because I felt these were the
people I was most like – men who had no claim to being special yet who achieved the extraordinary
by tapping into their own spirit of adventure and their drive to succeed. The more I’ve shared the

stories of my own adventures and of those I’ve met, the more people have come to me and said that
they, too, want push back the boundaries of their lives and explore their limits of who what they can
do and who they can be. Each one of them had an Everest and in my talks and workshops, I share
with them the lessons and skills I’d learned in a lifetime of pursuing my own ‘Everests’.

“A crashed economy pushed me out of my comfort zone and I was at a very low ebb when I climbed
my first mountain. Getting to the summit was the start of a new life journey for me in which I set out
to challenge the limits of what I could achieve and exceed the expectations that had been set down
for me. I first became an explorer of the physical world and, later, of the inner world of the human
mind and how it works. Now I work at helping people break out of old habits that are limiting them. I
guide them to explore their full potential and to become the hero in their own lives, just as my
mentors guided me over the decades.”

Now in his early sixties, Pat is still dreaming big and chasing new adventures. “My goals, though still
ambitious, are different and, I believe, more balanced. Being present in a mindful, loving way for my
family is number one. I still enjoy going away and lead adventure treks every year in various parts of
the world but I also relish being in Cork and Kerry and going out on the mountains where my
adventure life began.

“I still love hearing people’s stories, especially from the people who come to my home at the
Mountain Lodge to share their goals and aspirations with me. These are ordinary men and women
who have a dream to do something extraordinary. It is a joy to mentor and guide them to make their
dreams a reality and to share the skills I’ve learned over a lifetime as an adventurer and accidental
rebel.”

Adventurer, businessman, inspirational speaker and motivator, Pat Falvey was born in Cork city. By
the time he was in his early twenties he had built up a million-pound property development business
only to lose most of it before he was thirty when national recession hit. On entering the world of
extreme adventure, he achieved a number of firsts, becoming the first person in the world to
complete the Seven Summits twice by climbing Everest from both its north and south sides; the first
Irish person to summit an 8,000er without oxygen; the first person to lead an Irish team across
Greenland; the first person to lead an Irish team to the South Pole and the first person from the
Republic of Ireland to stand on the summit of Mount Everest. Now working in the areas of business,
adventure travel, corporate and personal motivation, Pat lives in County Kerry in the foothills of
Ireland’s highest mountains. Accidental Rebel is his seventh book.
ENDS

You Have The Power 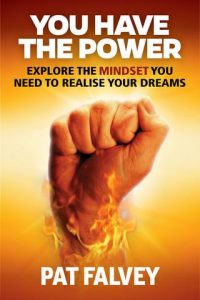