Request A Call Back

The Annapurna Sanctuary trek is in a high glacial basin lying forty kilometres directly north of Pokhara, Nepal’s second city. This oval-shaped plateau sits at an altitude of over 4000 meters surrounded by a ring of mountains, the Annapurna range, most of which are over 7000 meters. With the only entrance a narrow pass between the peaks of Hiunchuli and Machapuchare, where run-off from glaciers drain into Modi Khola River, the Sanctuary was not penetrated by outsiders until 1956. Because of high mountains on all sides, the Annapurna Sanctuary receives only 7 hours of sunlight a day at the height of summer. The unique combination of heights and depths in the Annapurna Sanctuary give rise to an extraordinary variety of ecosystems. The south-facing slope is “covered in dense tropical jungles of rhododendron and bamboo”, while the north-facing slopes, in the rain shadow, have “a drier colder climate similar to that of the near-by Tibetan Plateau.”

This beautiful trek mixes easily to moderate trekking on pathways through beautiful local villages full of colour and charm. Overall a great short to medium trek in the stunning Annapurna Sanctuary.

Our adventure first takes us to Kathmandu, the capital of Nepal, also known as the City of a Thousand Temples, and where every other day is a festival. Kathmandu is home to over 500,000 Nepalese, living a humble life in this vibrant city, the starting point for many expeditions to the Himalaya. It was once a Mecca for the drop-out hippie generation of the 60’s. However, today, Kathmandu has returned to its former ways, a place alive with the traditions and cultures of its many ethnic peoples. While here, we visit some of the famous Temples of the Hindus and Buddhas. We saunter through the busy streets and markets of the Thamel in the old region of the city and experience at first-hand the hustle, bustle, sights, sounds and smells while mixing with the locals of this lively, cultural town.

Each days trek is more spectacular than the day before as we make our way deeper into this mountainous wonderland of a Shangri-La. Mountains project like massive pillars from the deep, river-gorged valleys. We make our way along narrow paths etched from the steep hillsides in a mystical world of mountains. That is the heart of the most beautiful and inspiring mountain range in the world, the Himalayas ‘home of the snows’. They stretch in a high arch across Asia, 150 miles wide and 1700 miles long, from Indus in the west to the Brahmaputra in the east. All along the length of the Himalaya, its mountaintops are revered by the people of the valleys below as the place of their gods. You are in an area that for centuries has been the setting for epic feats of exploration and mountain climbing.

The area of Annapurna Sanctuary trek is famous for its possibilities of trekking and is considered to be the most famous and popular trekking destination in all of Nepal. This region is renowned for beautiful mountains such Annapurnas, Dhaulagiri, Manaslu, and Machhapuchre. There are three major trekking routes in Annapurna Region: to Jomsom Muktinath, to Annapurna Sanctuary (Annapurna BaseCamp), and a circuit of the Annapurna Himal itself. About two-thirds of the trekkers in Nepal visit the Annapurna region. The area is easily accessible, hotels in the hills are plentiful, and treks here offer good scenery of both high mountains and lowland villages. Pokhara is also a good starting place for short treks of one to four days, such as Ghorepani Trekking, Ghandruk Trekking and others. Mustang is also geographically a part of the Annapurna region, but treks to Mustang are subject to special restrictions.

The entire sanctuary is sacred to the Gurung people, the only people to inhabit it before the 20th century. They believed it was the repository of gold and various treasures left by the Nāgas, the serpent-gods known in India. The sanctuary is considered to be the home of several deities, from Hinduism and Buddhism as well the older animistic gods. The peak of Machapuchare at the entrance was believed to be the home of the god Shiva, and the daily plumes of snow are the smoke of his divine incense. Until recently, the local Gurung people forbade anyone from bringing eggs or meat into the Annapurna Sanctuary, and women and untouchables were prohibited from going there as well.

Groups are based on a minimum of 4.

We can check availability on dated groups if you are interested in an individual. 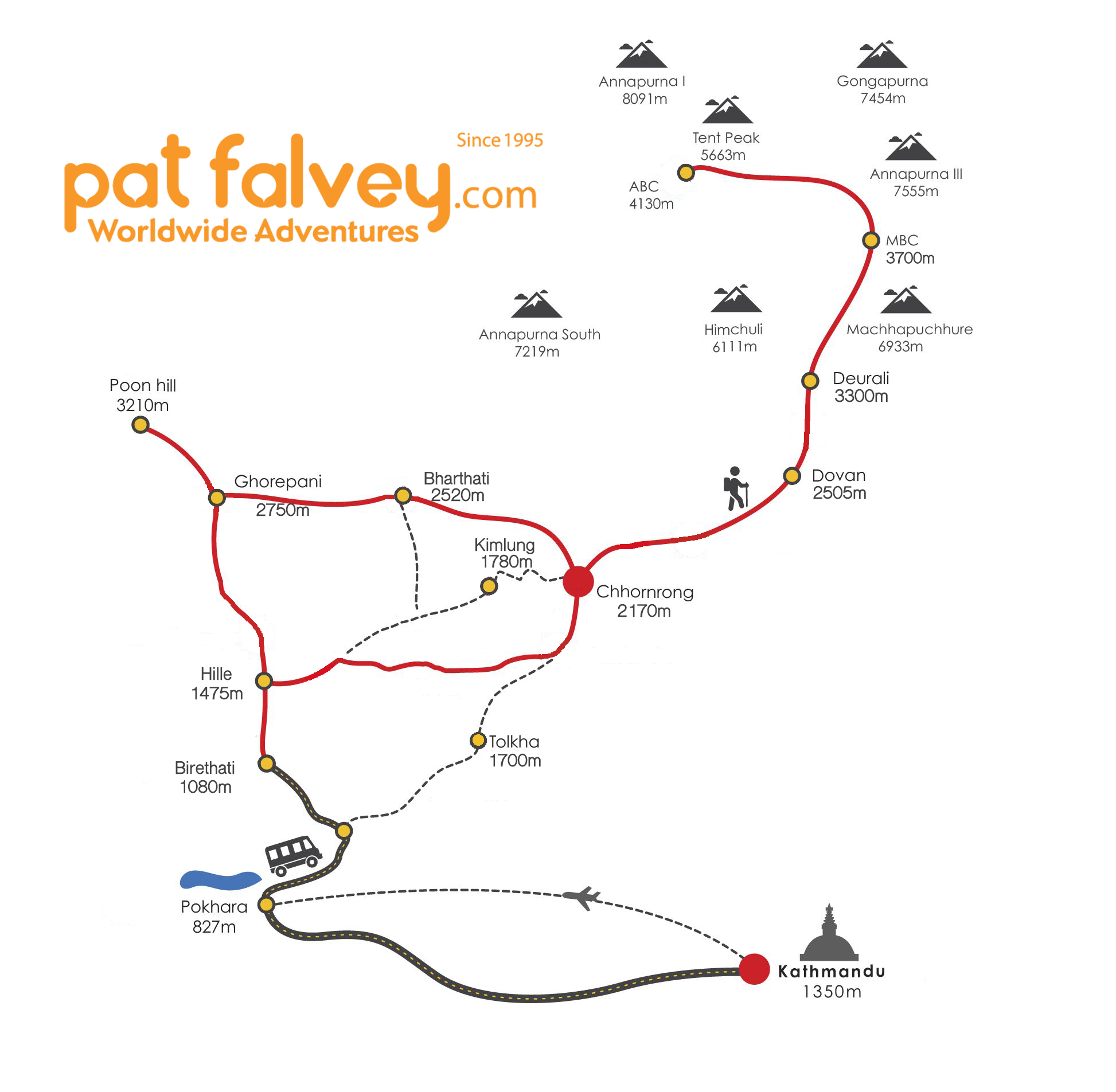 Early morning flight from Pokhara to Kathmandu. On arrival at Pokhara airport, you will drive from there about 30mins to Till Phedi and start your trek towards Tolka.

You will walk between forest towards Chhomrung. The trek will take about 6 hours.

You will begin the trek with decent from Chhomrung and your destination towards Dovan will take about 5 hours.

You trek to Machapuchare Base Camp where will you will stay in the lodges at the Base Camp.

From Machapuchare Base Camp, you will trek 3 hours To Annapurna Base Camp, the highest point in the trek 3.5 hours and drop down to Deurali and spend the night there.

You come back to Chhomrung and spend your 2nd night here in the place before heading out to Kimlung Khola.

You will trek to Kimlung Khola which will take about 3 hours.

Trek to Ban Thanti for about 5 hours which will mostly be an uphill climb.

You will trek to Ghorepani which will take about 4 hours from Ban Thanti.

This day will be a very early walk. You will get up at 3-4 am (dependent on the time of sunrise) in the morning to catch a glimpse of sunrise from Poon Hill (3193m). The walk is short, but the number of people hiking up will slow down everyone. You will spend some time at the top and hike to Hille (1430m).

You will trek to Birethanti for 3 hours and catch private vehicle from there and drive to Pokhara. You will have time to go around Pokhara and enjoy the beautiful city beside Lake Fewa.

Day 15: Fly back to Kathmandu

This trek is suitable for walkers & hillwalkers and can be achieved by a beginner with training. A reasonable level of fitness and experience on mountain trekking is recommended before departure. You will enjoy your trip a lot more if prepared well. Easy to Moderate going on good tracks that most fit people should be able. Most days will require 4 to 6 hours walking.

We run fitness assessments and hill walking weekends that are ideally suited for those who need a little more preparation, and please go to our Training Courses Section. We recommend these options to ensure a level of understanding of the requirements for the upcoming trek and remember to contact us if you have any queries or need advice.

We at Pat Falvey Irish and Worldwide Adventures Ltd are one of the world’s leading experts in High Altitude trekking in remote regions. We pride ourselves on putting trips together that give the best possible opportunity to succeed in the objectives of our clients and expedition teams to these areas.

Acclimatisation is key to success, and you mustn’t underestimate the time you allow to succeed. Most teams fail because they do not let enough time or do not get fit before treks or expeditions. We have had thousands of people to altitude and have devised what we consider a winning formula.

It is worth spending a bit of extra time to stay safe and achieve your goals. The pace is key to preventing AMS. The guides will monitor the group at all times for symptoms of the effects of altitude. If these symptoms persist then a person should get advice and maybe advised to descend. Our route also includes a briefing on how to notice and deal with AMS. (Acute Mountain Sickness)

Our highly experienced trekking guides have been working with us in Nepal for over 20 years. They will provide you with all the information and help during the trek. On selecting ‘Guided from Ireland’ trips (or on request for groups over 4), a guide will escort the group from Ireland. The guide will also arrange the porter’s role with your bags and any issues that may arise.

We at Pat Falvey Irish and Worldwide Adventures ensure that all our agents in every destination value and treat their employees including porters with respect and guarantee their working rates and conditions are adhering to the local employment and Health and Safety guidelines. We have built up a good relationship’s with all of our operators to ensure the welfare of their guides and porters is the priority. For more guidelines and information on porters, please go to our ‘Porter Guidelines’. Bags carried by porters are not to exceed 25kg in weight.

For general wear on the trek:

Preparation – We have selected a walking weekend to help you adjust to the goal of the trek. The weekend has two walks with advice and techniques for clothing and gear gave also. On Saturday we will climb one of Irelands highest peaks during a day hike, and on Sunday morning early we will go on a night hike simulating the requirements on the summit day of a trek which takes you out of your comfort zone before the real thing. This method allows your body and mind to adjust to the challenge ahead. For more info on this fitness assessment, weekends and day walks, go to our Irish training section. If you are a total beginner to walking/hillwalking, then a 12-month training program is recommended.
We suggest a training program of at least six months to trek to 4000-6000m comfortably.

You will need a valid passport. Please ensure the expiration date is six months past your travel date. Before applying for Visa, please check dates on the passport. Please bring four passport photos for visas at departure.
We will need to get a visa, and this can be got on upon entry to Nepal.